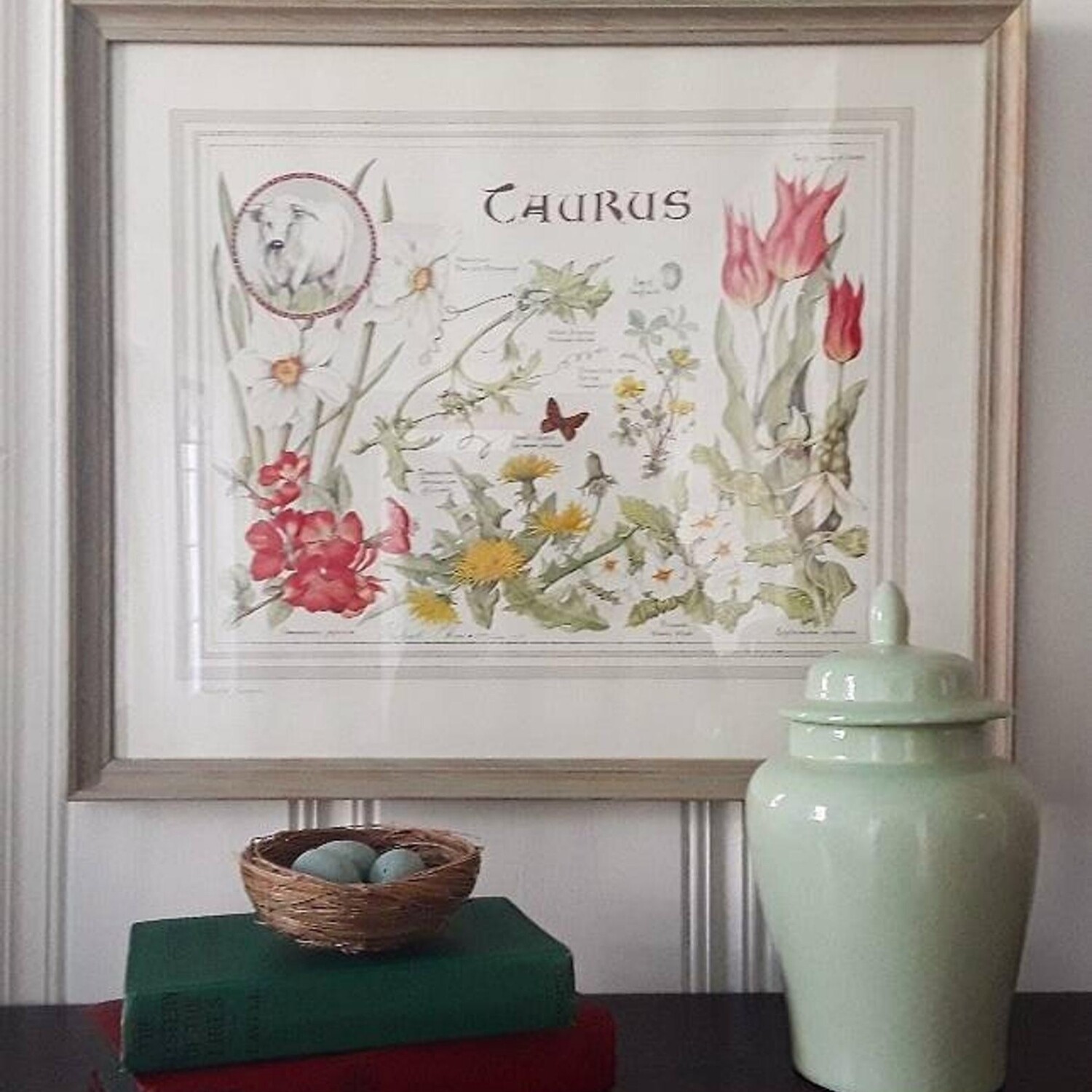 SKU 00657
$175.00
In stock
1
Product Details
This beautiful signed print from distinguished 20th century British botanical artist Elizabeth Cameron (1915-2008) is one of a series representing each of the 12 astrological or zodiac signs. Cameron began painting the zodiac series in 1982 to represent the astrological signs of her grandchildren. This print of Cameron's original watercolor "Taurus" depicts flora and fauna including red Queen of Sheba tulips, narcissus, dandelion, spring cinquefoil, primula, white bryony, fawn lilies, and Japanese quince, as well as a small copper butterfly and chaffinch egg. Printed in Italy by Stamperia Valdonega, the artwork is accented by a double border in the style of French matting and is finished in a wood frame with a pale green cerused finish that elegantly accents the natural elements of the print.


In overall great condition for its age, the print itself has no tears or stains. The print was signed in pencil by the artist as shown. The print also bears the embossed letters EC (the artist's initials) in the lower right corner. The print was professionally framed at Green & Stone of Chelsea, London according to a label affixed to the back, likely at a date contemporary to the production of the print itself. (The Kings Road location was used by Green & Stone from 1934 until early 2018.) The print's wooden frame has negligible wear, and the glass has no chips, cracks, or scratches. Minor wear to the frame's backing paper is as shown. Two D-rings are attached to the back of the frame for hanging.

Born in 1915 in Somerset, Scotland, Elizabeth Cameron showed an early interest in art and was initially introduced to painting by her governess. She later received formal instruction at Slade and St. John’s Wood Art School in London. During World War II she joined the Auxiliary Territorial Service, the women's branch of the British Army, as an ambulance driver. After marrying in 1945, she and her husband Major Allan Cameron moved to Ross-shire on the Black Isle to farm and raise their family. The couple set up one of the country's first frozen food enterprises, and Cameron is credited with pioneering the idea of boil-in-the-bag porridge. After selling Black Isle Frozen Foods in 1972, Cameron returned to her love of painting, using the specimens of her own garden at Allangrange as well as those of famous Scottish gardens as the basis for her detailed and accurate watercolors. Her botanical paintings were exhibited nationally as well as internationally, and she received three Gold and three Silver medals from the Royal Horticultural Society in recognition of her artistic work. In addition to the series of zodiac prints, she also published a number of books based on her limited edition paintings as dedications to her grandchildren. Cameron remained active and continued to paint in her later years. One of her most well-known paintings, Humanity Rose, completed in 1995 to commemorate the 125th anniversary of the British Red Cross, generated millions in charity for the organization. Since her death in 2008 at the age of 93, Cameron's family has continued to make open edition prints of her work available to botanical art and gardening enthusiasts around the world.

Ships fully insured via USPS Priority Mail within the contiguous 48 United States. Due to its size, this item will ship separately from other items purchased from the shop.

Vintage and estate items are by nature pre-owned and in many cases previously used. As such, these items often have evidence of prior wear, use, or flaws. Every effort is made to depict the items and their condition accurately in the listing photographs and description. Vintage and estate items are sold "as is" in "as found" condition, and all sales are final. Please see Our Shop Policies for additional information and feel free to contact us with any questions.